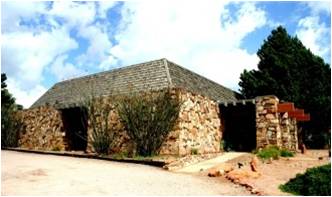 1958
A volunteer group, Friends of the Library, established Sedona's first library in donated space with three shelves of books and magazines, which also were donated.
1964
Once the Library was established, the informal group that was the driving force behind it organized into a Board of Trustees to administer the Library. It soon became apparent that administrative duties left little time for raising funds to provide ongoing support, so the Trustees decided to revive the Friends of the Library (FOL).
The Riordan (Redstone) Building on Apple Avenue and Jordan Road was leased for three years. A paid librarian position was established at $50 a month. Coconino County began contributing $480 a year, which paid half the annual rent of the library building.
1966
Sedona Public Library was incorporated as a nonprofit, privately owned organization that had 6,230 books. That same year, two Sedonans, Eugenia Wright and Helen Ecker, donated land on Jordan Road for a library building. The Red Rock News reported that the donation was prompted by a desire to see the land used to benefit the greatest number of people in the community.  Eugenia and Helen selected the Library as most representative of this ideal.
Funds for the building were raised throughout the community. The Red Rock News reported: "The Friends of the Sedona Library assumed the task of raising the $75,000 originally estimated to be the cost of construction. The drive was launched August 18, 1966, and when in the fall of 1969 it went over the top to the tune of something in excess of $77,000, there was enough left to defray the cost of materials that had risen substantially since the original estimate.”
1967
The Friends of the Sedona Library Inc. was incorporated to support the Library through fundraising and volunteering. It is a separate corporation from Sedona Public Library.
1968
Sen. Barry Goldwater, the keynote speaker at groundbreaking ceremonies, said, “A community without a library is a community without culture and without the backup needed by local education. I am particularly proud to be here today to pay my respects to people who recognized a problem and who solved it on their own without leaning on the federal government for help.”
1969
The new building opened on October 26.
1980
A Red Rock News photo shows seven volunteers whose total library service was 100 years: Sylvia Nemec (18 years), Cecil Brown (15 years), Louise Hardyzer (7 years), Jim and Hattie St. Clair (17 years each), Ruth Van de Water (13 years), and Rosamond Fisher (13 years).
1985
The 5,000-square-foot building on Jordan Road was becoming too cramped to meet Sedona's growing needs, and the library board began to investigate ways to expand the facility.
1986
Sedona resident Ethel M. Low came to the rescue in January, with a donation of $326,000 to buy land for a new and larger library. The Design Group was hired to design the new building.
The Red Rock News reported: “In making her gift, Mrs. Low said that she has long been wanting to do something that would be of long-lasting benefit to the community and that she had finally settled on the library as being a service that would always be needed and one that would benefit people of all ages and from every walk of life.”
Volunteer Louise Hardyzer retired at age 78. She walked four miles from her home to the Library five or six days a week (but she always accepted a ride home.) It was estimated that she walked some 12,000 miles and saved the Library $200,000.
1988
Fundraising for the new building began at the Jordan Road Street Fair, where $9,000 was raised. This convinced FOL and the Board of Trustees that public funds again could be raised for a library building. 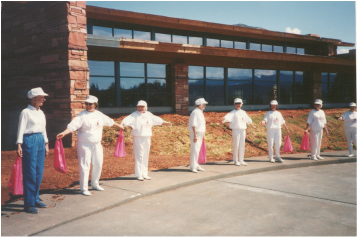 1991
Ground-breaking ceremonies took place October 2. Costs for the estimated $2.5 million project were lowered considerably by gifts from a generous source:  the construction industry. Contractors, subcontractors, and material suppliers associated with the job gave outright voluntary gifts of materials and labor. Sedonan Steve Driscoll, project manager and owner of Driscoll Contracting, Inc. and a long-time member of the Board of Trustees, said, “Everyone who’s working on the project wants to stand there one day and say ‘there it is…I helped build it.’”
1994
On May 14, a parade of 500 Sedona citizens formed "Books Across Sedona" to symbolize the move to the new library building at 3250 White Bear Road. The book-carrying chain moved 5,000 books from the Uptown location. It would have required some 4,000 people to move all the books by hand. The move was completed during the next three weeks, and the new building opened its doors to the public June 6.
At the formal dedication on October 1, Sen. Barry Goldwater once again gave the keynote speech, 26 years after his appearance at the groundbreaking of the first library building.
Sedona’s first piece of public art, the statue of Sedona Schnebly in front of the new library, also was dedicated during the ceremony. 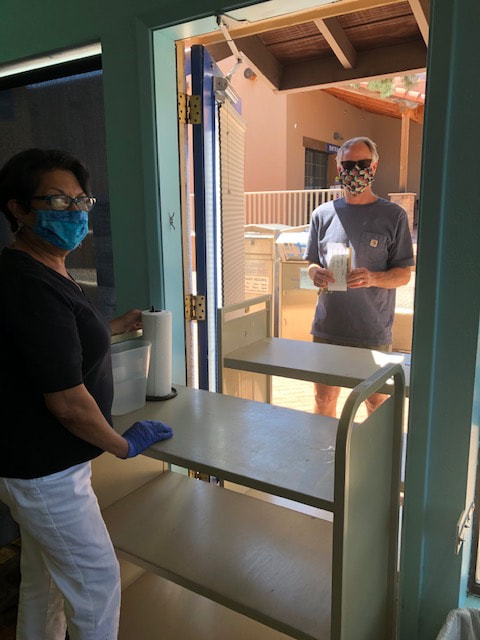 2000
In October, Sedona Public Library joined the Yavapai Library Network, which increased the number of resources available to our patrons from 60,000 to 600,000.  In December of 2000, the Library began offering internet access to the public.
2002
On September 7, the new children’s library opened.  The Library was expanded by 1,500 square feet to a total of 25,500 square feet after this addition.
2005
SPL in the Village (originally called the Village Service Center) opened in December, providing a place in the Village of Oak Creek for patrons to pick up and return items available through the Yavapai Library Network. Public internet access computers and free Wi-Fi also are available.
2006
Veterans History Project volunteers began meeting at the Library with veterans to collect their stories, which are sent to the Library of Congress. Over 250 stories have been gathered.
2007
The City of Sedona Citizen Survey showed that 88% of citizens used the Library’s services within the past year. Further, the Library received a score of 81 out of a possible 100 for the quality of services, an increase from the previous two surveys and the highest rating of all services provided by the City. The survey showed that 63% of the population used the Library anywhere from 3 to more than 26 times in the past year.
2008
Sedona Public Library celebrated its 50th year with a birthday party on June 6, the 24th anniversary of the opening of the White Bear Road library. At the celebration, the Sedona Schnebly statue was rededicated.
​2012
Imagination Library registration began at the Library. The Rotary Club of Sedona provides monthly books to preschool children in Sedona and the Village of Oak Creek free of charge in conjunction with this Dolly Parton program.
The Library introduced self-service checkout stations with RFID technology.
2014
The Library received a $9,200 LSTA grant from the Arizona State Library to rearrange the children's library space and create a play-to-learn area.
Sedona Public Library was named a Star Library by Library Journal magazine. The designation is based on four types of per-capita use: visits, circulation, public access computer use, and program attendance.
2015
To better serve residents of the Village of Oak Creek, the library service center moved to Bell Rock Plaza.
The ACT One Culture Pass was introduced, giving cardholders the opportunity to access 17 different museums and cultural attractions across the state.
​2017
Friends of the Sedona Library opened a new location for their book sale. The Library provided an adjacent property so the Friends can hold sales in their own space, next door to the Library on White Bear Road. The Friends' entire inventory of books and other materials is now available in their bookstore all year long for patrons and visitors alike.
Results of a citizen survey conducted by the City of Sedona indicated that library services received one of the highest scores for quality of community service, with only fire services and emergency medical services rated higher. 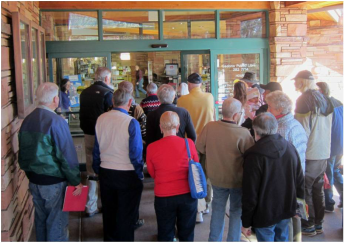 Present
Nearly 200,000 people come through the doors of the Library each year to avail themselves of information, entertainment, and job-finding resources; internet access; and programs for all ages. Library resources now available to Sedona residents through the Yavapai Network total over 1.3 million. In addition, the Library bolsters the efforts of innumerable local nonprofit organizations through active partnerships.
Volunteers still are a cornerstone of the Library. More than 150 volunteers, from teens to senior citizens, help keep SPL running smoothly. Volunteers provide nearly 15,000 hours on an annual basis.
Sedona Public Library is a 501(c)(3) nonprofit organization. We are grateful for the support of the City of Sedona, Yavapai and Coconino Counties, Friends of the Sedona Library, businesses and foundations, and individuals like you.